Corel VideoStudio (formerly Ulead VideoStudio) is a video editing software package for Microsoft Windows distributed by Ulead Systems (a division of Corel). The latest version of the software is X5 released in the first quarter of 2012.

The software allows both storyboard and timeline-oriented editing. Different formats are supported for source clips, and the resulting video can be exported to DVD, AVCHD, HD-DVD and AVI. VideoStudio also supports direct DV and HDV capturing to disk.

Users can overlay a Flash animation, an image, or text on the video. However, the number of overlays allowed is limited. The user must remove a particular color from the overlay video so that the required background or picture can appear in the foreground.

VideoStudio can change apparent video playback speed, reverse it, and modify hue and saturation. It provides tools that let the user trim, crop, and split video tracks. The soundtrack can be split from the video track, allowing the audio to play at a different pace than the video. A feature that Corel calls “SmartRender” renders only the edited portions of video, so a user can preview edited footage without VideoStudio creating temporary files. This feature also makes final rendering much faster.

Video Studio supports editing of high definition video. Proxy files are smaller versions of the video source that stand in for the full resolution source during editing to improve performance. 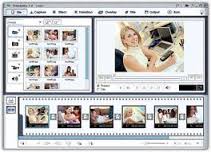